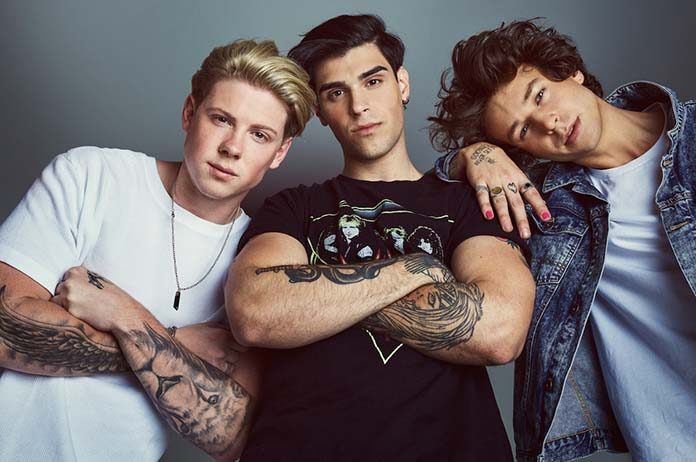 You may have heard of them and you may not have, but if you haven’t; listen up!

Darling Brando is THE band to listen to right now. Comprised of musicians Tom Jay Williams, Vlado Saric and Alex Mathers, this Aussie trio are the newest hitmakers that are going to take the world by storm.

Standing in the sun, shirtless and getting a tan, Tom spoke to me over the phone about the backstory of Darling Brando, the inspirations behind their singles, and about how COVID-19 has affected their introduction into the world as a band.

Starting off as contestants on Australian Idol and The X Factor, both Vlado and Tom had experience performing in music. Alex, however, started in the field of rugby, having a contract with Melbourne Storm, but had to stop playing due to a knee injury. That’s when the three joined together.

“I knew Vlado through a couple of work kind of things, because we were both making music before the band, so we kind of knew each other and were mates. And then, Alex was friends with Vlado so we kind of decided to all come together and be like, “yeah, let’s enforce this, and all be kind of a unit and one.”

“The manager that actually discovered 5 Seconds of Summer, he saw us and was like ‘this is really cool’ and he hadn’t worked on anything since 5SOS and he was like ‘let’s do it,’ and we did it, and I guess that’s kind of where Darling Brando was born. We signed to Sony not long after that and it’s been a whirlwind kind of ride ever since.”

Each of the members have their own personal taste when it comes to music and they combine them when making their singles, quoting classic bands as inspiration.

“It really does differ depending on what kind of record we’re making,” Tom said.

“I love Hot Chelle Rae as a band, so luckily enough, we got to work on our second single Nightlights with Nash and the singer from Hot Chelle Rae, which was just an incredible experience for us, so that was kind of a band that we draw inspiration from, I guess from the pop sense. Being able to work on a track with them was pretty cool.”

“I’ve always said I like the Jonas Brothers, I was a Jo-Bro stan from day one and I always take inspiration from them and kind of what they do. At the same time, we’re all different. Alex kind of listens to the country stuff, Vlado listens to more heavier alternative music and I just listen to pop. So, I think, when putting them in a room together, it really does create something special. Which is, I guess, Darling Brando.”

Each of the members takes turns in writing music for the band. They write on their own, or in twos, or together, and even join other writers when forming their music. All throughout lockdown, these guys were living together and at the beginning of COVID, they all had to split up. They had no choice but to start writing over zoom calls.

Then came the inspiration behind their singles.

“Beat Up was the first record we released. It was a song in a bag of songs. We’d been working on it for, like, a year before we signed the record deal, so I think we always knew we were going to put out a record that, you know, portrayed us in a way that we wanted to be shown to the world.”

“When we started working Beat Up, we really did feel that that was probably a great step to start with. It really does show our vocal abilities and that’s something we really wanted to be clear and put forward because that’s what we do. I think the biggest misconception about us is that ‘they’re just kids, they just get told what to do’ and that’s not what happens at all.”

“We have full creative control with our label at Sony, which is just the most incredible thing ever. You know, we write, we play multiple instruments between us, so, with Beat Up it was always definitely one that we just wanted to start with, especially because it’s a little bit more stripped back, so there was room to grow. We didn’t come out with the explosion straightaway deliberately. We wanted people to kind of understand where our roots come from.”

Wild Eyes is Darling Brando’s latest single, the follow up to Beat Up Guitar, which has reached over One Million global streams since it was released to the public. Collaborating with artists from around the globe, this single was written and produced between Australia, Scandinavia and the US.

Darling Brando has said this about the meaning behind Wild Eyes: “The song is about falling in love and the journey and story behind it. Everyone can relate to needing some reassurance that true love does exist. You just need to stop looking for it. And when you do, magic can happen…”

Tom also went into depth about what Wild Eyes means to him.

“Wild Eyes is about love, well to me anyway. The one thing with Darling Brando is that we always have different ideas on what records are about, which I guess is what music’s about. It’s up for interpretation. Wild Eyes was a song about exploring and not holding back and putting your best foot forward. We think we really captured it well. It started as an acoustic record that sounded a lot like Beat Up Guitar.“

“But then we really wanted to put forward our band inspirations and stuff like that, especially when we saw that maybe we were gonna be able to play live this year, and do some touring. We really wanted to beef up the live band and the live set so we obviously went full cream on the production. I guess that’s where Wild Eyes sits now. It’s definitely the explosion that I was talking about before, that we didn’t want to come out with first. It’s somewhere that we’ve ended up and we’re very lucky to have been able to do that.”

COVID-19 has been rough on everyone, but these guys have had it tough due to the fact that they’ve been trying to get their name out there during a pandemic in which there is no live music or touring.

“It’s unfortunately affected everything. When Beat Up came out, the first record, it was literally the week of COVID. When it first hit, we were going on our press tour for Beat Up so, it highly affected us because we like to pride ourselves on the way that we interact with people and our energy. It’s harder to get across on telephones and you know, webcams but that’s the way it kind of had to happen.”

“We did Sunrise from webcams, we did all our radio interviews via zoom and phone calls, so, I think that it was always gonna affect us in a big way. We just didn’t know how much until the last couple of months. We were like “Shit, you know, we’re not actually gonna be able to tour until 2021 at least” and we had to put a show on hold.”

Tom spoke about the band getting ready for hopeful tours and shows that might take place next year.

“We’ve been constantly rehearsing and getting ready for the shows anyway. That’s what a band does, and you know, we’re just holding our breath that things open up. I mean, we haven’t even been able to go home. I’m from Adelaide, so I haven’t been home to see my family in like nine months. So, I think it’s just about holding our breath and making sure that, you know, the world kind of opens up.”

He then went on to explain about the possibility of an album coming out.

“You know, there’s a body of work that’s definitely being worked on. It’s just about, I guess, how we wanna roll it out. There’ll be more music definitely coming very soon. There’s a couple of singles we’re working on right now that we’re really excited about. Definitely, an album will follow, sometime down the line, but right now it’s kind of like just keep your eyes directly in front of you. It’s the world we live in, where it’s just, everything changes so fast, so we just need to make great music and get it out to you guys, whether it be a full album or singles. But, lots of music coming soon, that’s for sure.”

You can check out Darling Brando’s latest single below, as well as their other singles. They are definitely THE band to be following right now. If you haven’t heard their music, you’re missing out.

You can also follow them on all their socials down below. Be sure to check them out because you definitely won’t regret it!

Written and interviewed by Ashley Riordan