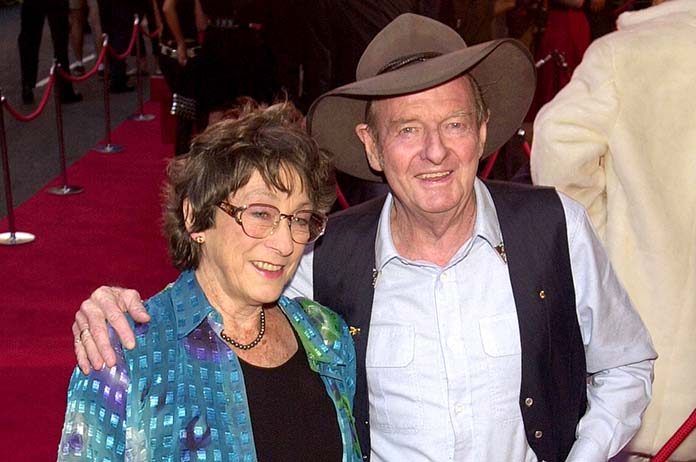 They say behind every great man is a great woman.

Well, this was certainly true for the king of Australian country music, Slim Dusty. The great woman in this case is of course his queen – his wife of 52 years, Joy McKean.

And their unique, loving partnership was revealed in full, candid detail in the new documentary Slim & I, directed by Kriv Stenders, who bought us other amazing films such as Red Dog and Danger Close: The Battle of Long Tan.

Joy McKean, born in the Hunter Valley region of New South Wales in 1930, was a singer in her own right well before she met the famous Slim Dusty, performing with her sister Heather on 2KY in Sydney as The McKean Sisters, both well-known for their yodelling harmonies.

Joy, first met Slim in early 1951, introduced to him by DJ Tim McNamara. It was McNamara who came up with the idea of Slim going on tour with the sisters, along with Gordon Parsons (who wrote the most famous Slim Dusty song, Pub With No Beer) and Slim’s childhood friend Shorty Ranger.

Both Joy and Heather laughed as they admitted they didn’t think much of the country music star at first. In fact, Heather’s first impression of Slim was “Who do you think you are?”, as she wasn’t happy about him “eyeing my sister off”.

Joy describes Slim and the other men on the tour as “Blinking larrikins”, saying that she and Heather were constantly keeping them out of trouble.

But, as Joy herself said in the first few minutes of the film, she fell in love with the man, not the name.

The couple married in late 1951, and so began not only a marriage, but a partnership and double act of more than 50 years.

Together, they recorded over 100 songs and albums, and won 45 Golden Guitar awards between them, as well as other honours such as the Order of Australia and Order of the British Empire.

They performed on the travelling show circuit with the Foster family for some years, then started their own shows, travelling over 30,000 kilometres for ten months of every year, including to numerous remote parts of Australia that no performer had ever gone to before.

All fans of Slim know that a great many of his songs were written by Joy, who had been writing songs since she was a child.

Some of her songs became the most well-known of Slim’s repertoire, including The Biggest Disappointment, Indian Pacific, Walk A Country Mile and Lights On The Hill, which won Joy the first ever Golden Guitar at the Tamworth Country Music Festival in 1973.

The story of how Joy came up with Lights On The Hill is a particularly fascinating tale.

“I was driving a small station wagon, and pulling a fully loaded caravan as well, on a mountain road on a black rainy night,” she said, recalling that highly dangerous drive.

“The station wagons in those days had the dimmer switch for your headlights…on the floor. But I only have one foot to operate in a vehicle (Joy suffered from polio as a child and wore a caliper on one leg in order to walk). My left foot is completely paralysed.”

Joy described the fear she felt as trucks would constantly come over the hill of that mountain road, their lights blinding her as she constantly moved her right foot back and forth to turn on the dimmer, go back to the accelerator so the car wouldn’t stall, then back to turn the dimmer off.

This formed the basis for the award-winning song. It became the first trucking song in Australia, with many more to follow for Slim.

Of course, Joy is not the only person to speak in this beautifully-created film. Her achievements, life and songs are all spoken of in reverence by many other musicians who were interviewed as part of the documentary.

These include: Troy Cassar-Daley (who has covered both Lights On The Hill and The Biggest Disappointment); Kasey Chambers and her father Bill; Keith Urban (who toured with Slim and also performed Lights On The Hill alongside him); Chad Morgan; Paul Kelly; and Cold Chisel’s Don Walker.

All of these interviewees spoke of their love and respect for Joy, and how her songs inspired their own musical tastes and careers.

Joy not only spoke of her time travelling with Slim, but of their life as husband and wife. I laughed as Joy spoke of the normal domestic disputes they had, showing that despite their fame, they were just like any other married couple.

One moment that especially bought out a chuckle from me was when Joy spoke about the time they moved to Sydney in the 70s in order to have more time together as a family while still recording songs.

This move caused some friction, as Slim was not happy staying in one place rather than travelling.

“I wanted him to stay in Sydney so we could cut back on the touring,” Joy said.

“It didn’t work out so well, and so Slim was a bit toey. And before long, the rot set in.”

“Quite frankly, my beloved Slim was impossible to live with,” she concluded, laughing at the memory.

And so from then on, the couple went back to travelling, only returning to their house in Metung, Victoria for the Christmas holidays every year.

Slim Dusty passed away on 19 September, 2003 at the age of 76 after battling lung and kidney cancer.

Now aged 90, Joy McKean is still writing songs to this day. She has also written two books: I’ve Been There (And Back Again), which tells of the times of travel and songwriting with Slim; and Riding This Road, the story of her life.

Slim & I is a story of love, music and travel, one that I thoroughly enjoyed and encourage any Australian, whether you’re a fan of country music or not, to watch.