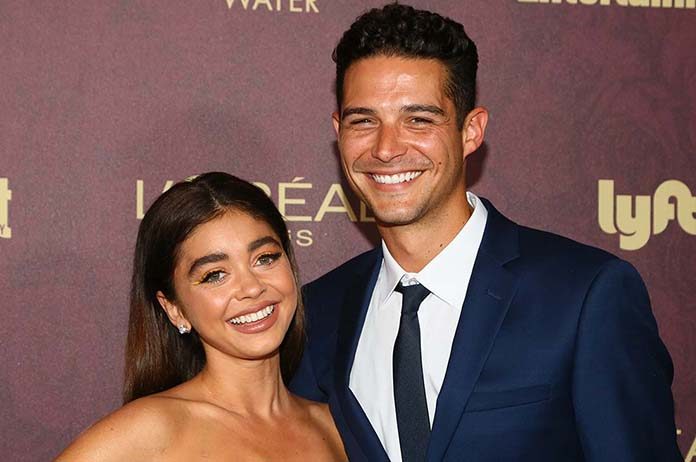 Who needs a rose when you have a ring? Sarah Hyland and Wells Adams are engaged!

Hyland, 28, and Adams, 35, announced the happy news on Instagram on Tuesday.

“That can’t eat, can’t sleep, reach for the stars, over the fence, world series kind of stuff @wellsadams,” Hyland shared.

The Modern Family star captioned a slideshow of photos, which show Adams getting down on one knee while on a beach.

In the first photo, Hyland can be seen with her hand covering her mouth as Adams popped the question.

Adams, an alumni of The Bachelorette, shared a video of the precious moment and photos of them toasting to their new chapter.

The couple first flirted on Twitter in 2016, but didn’t get together until the autumn of 2017.

Hyland had been vocal about her not-so-secret crush on the podcast host since his time vying for JoJo Fletcher‘s heart on season 12 of The Bachelorette in 2016. (Adams later confirmed he first met Hyland through social media.)

After surprising fans by dressing up in a couple’s Stranger Things costume for Halloween in 2017, they spent time together in his home base of Nashville and hers in Los Angeles, documenting their adventures on Snapchat and Instagram.

In December 2017, they selected and decorated their first Christmas tree together. And they’ve been living together since August 2018, when Adams moved to L.A.

“The big concern was I have a big dog and she has two dogs and how that was going to work out,” Adams told People.

Luckily, their precious pets get along.

“Everything’s kind of settled down,” he added.

Are you happy for Sarah Hyland and Wells Adams’? Let us know in the comment section below.