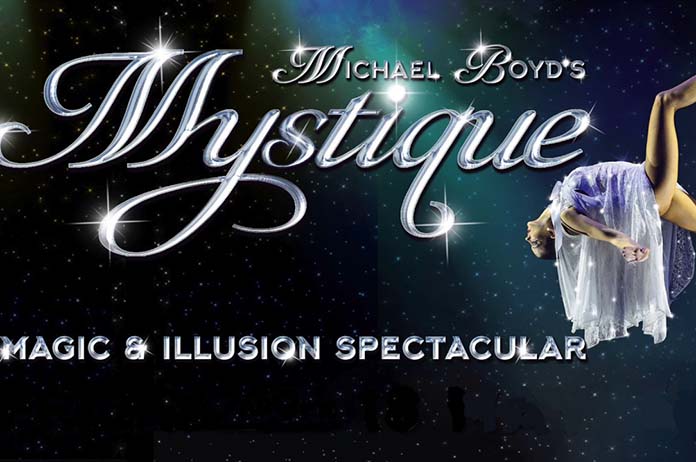 “You’ll see it but you won’t believe it”

I saw it but I didn’t believe it. Things happened right in front of my eyes and I felt fooled.
They say “You won’t believe your eyes” and I certainly didn’t. Wow after wow!

Internationally-acclaimed illusionist and 2013’s Australia’s Got Talent finalist Michael Boyd held his Mystique Magic & Illusion Spectacular at State Theatre on Thursday 29th September and it was fun for the whole family.

There truly was something for everyone to love. Funny jokes and humorous magic tricks that both children and adults could enjoy, and good-looking male and female dancers for a bit of adult eye candy.

The show’s production was grand for a small State Theatre show and Boyd’s presentation was astounding, keeping everyone’s attention for the whole show. He has 6 dancers in his show; 4 women & 2 men; with amazing choreography and wonderful costumes. The music chosen paired perfectly with the illusions and the dancing.

The biggest trick of the show was Boyd’s Scorpion illusion; the same trick that Illusionist Cosentino also performs in his shows. Always a show-stopper in any performance and is always impressive.

My favourite moments of the show included a sword trick that Boyd did (which I think should have had a warning for the little children in the audience), a future-telling trick with a beach ball and random audience answers, and levitation.
Levitation has always amazed me. Even though a lot of magicians and illusionists do it, it is still so magical and creative. Boyd even put a twist of his levitation trick, which I won’t spoil for you.

Boyd also included a lot of audience participation and interaction in his acts, particularly with children. It was so cute to see these little ones having their 5-minutes of fame and glory. They got to help Boyd with his tricks and illusions on stage and in return, received a free gift. The funniest child participation was when Boyd and one of his female assistants hands a 10-year-old boy a big magician jacket, and he hides behind the boy, puts his arms through the jacket and makes it look like the boy is doing the magic tricks. It was very well done and was very funny.

Obviously I really enjoyed this show and have so many good things to say about it, but when I finished watching the show, I felt like something was missing and I couldn’t give it a full 10/10. I can see a lot of hard work has been put into the show. That has definitely not gone unnoticed and I really take my hat off to Boyd and his team but I felt only two things brought the show’s rating down a little bit.

I love dancing and I am a professional dancer myself so I loved the choreography and took inspiration from it, but I felt that there was a little too much dancing for a magic show. I think it should be advertised as a magic and dance show so that everyone knows what they are getting. Most magic shows that feature dancing only have about 1-minute of dancing. I know that Boyd needs time to get dressed and prepare for the next trick but I still feel like there was a tiny bit too much dancing. As an audience, we come to see magic and illusions, not dancing. It did make the production value grand though.

The other thing is the ladies’ costumes at the finale of the show. For most of the show, they had short shorts underneath their costumes but in the finale, they had G-strings underneath. I know sex sells but I don’t think it was appropriate for a family-friendly show with a lot of children in the audience.

In conclusion, Michael Boyd knows how to put on a show. He captivates and entertains all ages, and it was a pleasure seeing how he does it. His show Mystique was fun, and I could not believe my eyes in every trick.

Check out Michael Boyd’s website to see where he will be performing next.

QUICK FACT: Boyd’s illusions were designed and built by the same team that work alongside the famous David Copperfield.