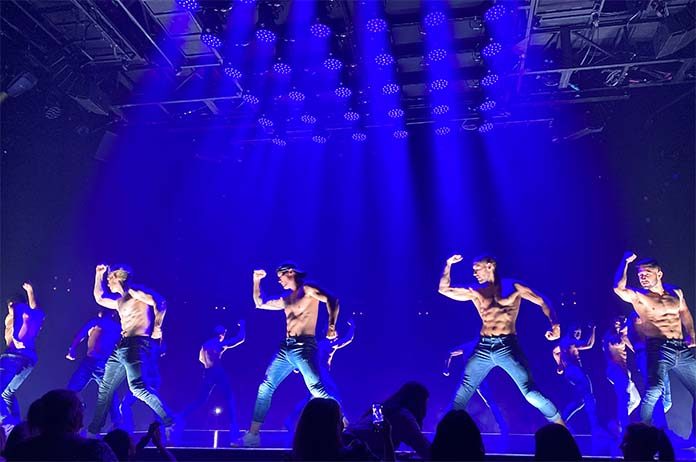 If you want a fun night out with your friends, then I highly recommend Magic Mike Live!

The show is so good that I want to see it again….and I don’t say that about many shows. It isn’t just your typical male strip show. I saw another male strip show many years ago and it was quite repetitive. It just got to the point when you think ‘OK. I’ve had enough of this. What else have you got?’

I think the issue with other male strip shows is that they forget to realise that women need foreplay. We need to be romanced and put in the mood. We don’t want you grinding on us straight away. The show was very empowering for women. Women left the show feeling turned on, powerful, sexy and free. It even changes the definition of sexy, and reinforced the positive treatment of women and respect for female sexuality. There is a part of the show which they dedicate to the sexiest word on the planet…..’Permission’.

One of the things I loved most about the show is that it is making it ‘normal’ to talk about sexuality, fantasies and being turned on. There was something for every woman. From different types of men to even different fantasies. It was every girls’ fantasies brought to life. Men in suits. Men in leather. Men doing aerial acts. And the most common thing you see in the show, men in jeans and a t-shirt. I like to call it ‘the every day man’. It’s what you see more of on a daily basis, right? And there is something sexy about it.

“We imagined a world where sexuality was celebrated as art. Where people could come to shows like ours with their friends and walk out with huge smiles on their faces, feeling turned on, powerful and free.” – Channing Tatum

We of course also have to talk about the set list. A whole evening of sexy songs to put you in the mood. Songs like Candy Shop by 50 Cent, Stay With You by John Legend, The Darkest Light by Lafayette Afro Rock Band, Champagne Life by Ne-Yo, Sail by AWOLNATION, Be Faithful by Fatman Scoop, Suavemente by Elvis Crespo, I Can’t Quit You Baby by Otis Rush, Permission by Ro James and Mine by Bazzi.

And of course they had to have the famous Magic Mike theme song….Pony by Genuwine, which started out as a slow ballard at first. It was a nice twist on the original classic, and then it broke out into the hardcore sexy tune as we know it.

They even had pink dollar bills printed out on each table called Magic Mike ‘One Love’ money that you can throw at the guys when you see something you like. I think this was a much smarter idea than real money. Plus, they must have had a lot printed out. They were not only on each table but also fell from the ceiling a few times during the show.

The choreography was one of my highlights. As many of you know, I am dancer myself and have loved it since I was a little girl so whenever there is dancing involved, I thrive and look at every single step and let me tell you. The guys on stage did not miss a beat. I was so impressed. So much in fact that I wanted to get up on stage and dance with them. The songs chosen for the show all had heavy beats, which created that incredible atmosphere and gave me goosebumps. The beat partnered with the cool lighting just made the show. Congrats to the sound and lighting department on a great job each night.

The pop-up set is called The Arcadia, which was specifically created for the show to tour around the world, but WOW! It was so grand and unique that it looked like a permanent fixture in Sydney’s Moore Park, especially when some things came down from the roof during the show.

Inside has almost like a 1920s feel. There is plenty of different seating areas (six different types of seating to be exact) and with the help of ladders and railings that the guys could stand on to and hang off, there is a good view of the show no matter where you sit in The Arcadia. My favourite part inside The Arcadia was the triple storey ‘bar’. It’s not a real bar but man, when you first walk in, it sure looks like it. But it was the perfect spot for the guys to dance on in multiple parts of the show.

My advice would be to also come to the show early and stay behind afterwards with your friends because there are some lovely couches and seating areas out the front of The Arcadia. So grab a cocktail and sit outside for some fresh air before you see some sexy men.

Magic Mike Live is a show for everyone (18+ of course). Every type of woman and gay man. The show is filled with so many surprises (that I will not share) and the most amazingly talented dancers I’ve ever seen in my life. I would give this show 11/10 if I could. That should say something! Now, stop looking at the sexy photos in this article and buy your tickets now. Have a fun night out with your friends.

The show has already been to Las Vegas, London and Berlin, and will travel to Melbourne next (in June), but buy your tickets here for the Sydney show. It is here until April 4.