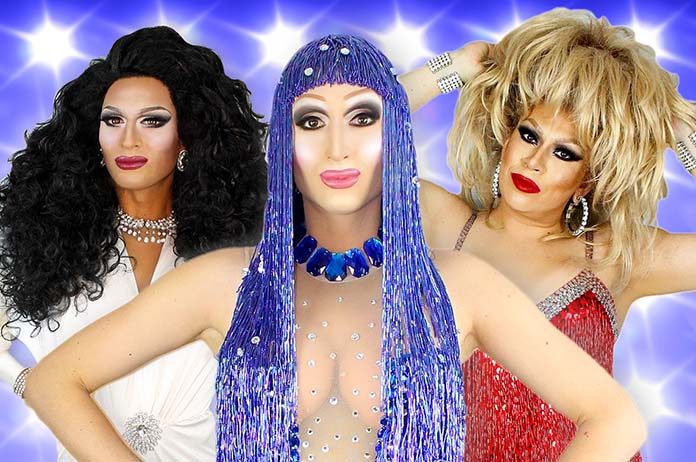 Drag queen Prada Clutch recently stopped by Rave It Up HQ to chat about her new show, Les Divas: An All-Male Revue, which is premiering at Blacktown Workers Club on February 2.
Les Divas will see Cher (aka Prada Clutch) opening her show on the Las Vegas strip and inviting some of her most famous diva friends to help celebrate including Barbra Streisand, Shirley Bassey, Tina Turner, Mariah Carey, Beyoncé, Whitney Houston, Celine Dion and Diana Ross.

Hey Prada. Welcome to Rave It Up. It’s a pleasure. Thanks for taking out some time to chat with us.

I’ve been singing since the age of eight so I’ve always loved music, singing and performance. I studied Music Theatre at the Australian Institute of Music and this is where my appreciation for the art developed further.

Were there any other careers that you wanted to pursue when you were younger?

No, I always wanted to be a singer.

Early in my career, I did but I guess that was where my mind was at, although I did not let it get me down. It actually made me stronger. These days, it’s quite the opposite: I get people coming up to me after my show saying they dragged their husband along to the show and their husband had no interest in drag shows, but they ended up having one of the best nights being thoroughly entertained.

Why did you choose the name Prada Clutch? Are you a big fan of Prada?

Being of an Italian background, I wanted a name that had a link to my Italian heritage whilst being high-end and classy – hence Prada Clutch was born. I love Prada; I would never say no to a sneaky little trip to purchase a Prada handbag or two!

As we can imagine, it takes a while to get all of your hair, make-up and costumes on. How long does it actually take for you?

My wigs are always pre-styled. They can take anywhere from one to two hours to style before a show. I’ve got the makeup component down pat so I can have that complete in under an hour these days. And as for the costumes, some of my on-stage quick changes are only seconds – you’ll have to come to the show and witness it yourself!

You will be hitting the road in February and March this year with your show Les Divas: All All-Male Revue. What can we all expect from the show?

You can expect the greatest divas being impersonated like never before. I’m the Goddess of Pop, Cher, for the evening as I take you to Las Vegas for a show with my best diva friends: Barbara Streisand, Shirley Bassey, Tina Turner, Mariah Carey, Beyoncé, Whitney Houston, Celine Dion and Diana Ross. And you’re going to need your sunnies because we have used kilo upon kilo of diamantes to make every costume visible from the backrow!

What’s your favourite song to perform in the show?

Cher’s If I Could Turn Back Time

Cher has a very distinct voice. How have you found playing her? Was it hard at first to get that voice right?

I’ve been impersonating Cher for some time now and I absolutely love it. Last year during Mardi Gras season, I was Cher more than I was actually Prada! Being a live singer, I’ve been able to use my vocal control to imitate Cher’s distinct sounds whilst talking and singing.

Les Divas is choreographed by Stephen Clarke who has worked with Kylie and Dannii Minogue, Cyndi Lauper and Diana Ross. How does that make you feel? Have you learnt a lot from him?

It makes me feel very special and honoured to be included with such names. I’ve learnt so much from Stephen. He knows my strengths and my weaknesses, and he knows how to make me look fabulous all of the time – he really is a national treasure!

Even though you have already achieved so much in your career Prada, what else can we expect from you in the future? What’s up next after Les Divas?

The sky really is the limit for me. I’ve always wanted to be famous and be an Aussie household name. I can see myself hosting my own television show in the not-too-distant future – you heard it here first, darlings!

What advice would you give to our readers if they would like to follow their dreams of getting into the entertainment industry?

Focus on what makes you happy and the rest will fall into place. People really overcomplicate it, but all life really is about is joy – find your joy and follow it.

Don’t be so hard on yourself. You will get to where you want to be if you maintain focus. And it’s not about the destination, it’s about the journey, so have fun doing what you do.

Jump on SydneyDragQueen.com.au to keep update to date with where I’m touring to, as well as all the other fabulous events that I’m hosting.

Thanks again for having a chat to us today Prada. Keep in touch!