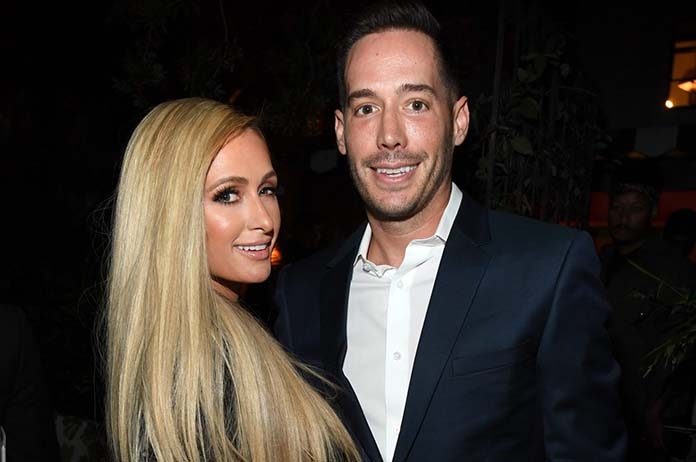 Paris has said that her relationship with Carter is the inspiration behind her wanting to shoot the music video because the song “describes the way I feel for him.”

“I’ve been listening to Paris (her studio album) so much with my boyfriend. In 2006, I didn’t even know what love was, but the words to [Heartbeat] finally have meaning.

“It describes the way I feel for him so much that I was like, ‘I have to do a music video.’ I thought it’d be perfect to release around Valentine’s Day, just as a celebration of finally having true love.”

You can see Paris modelling various outfits in a photoshoot, as well as showing her bare skin in a garden covered in glitter, in the music video.

Carter, who’s been Paris’ lover since 2019, doesn’t show his face in the video. He does, however, make many appearances holding her hand and kissing her at the photoshoot.

He is seen wearing a navy dress shirt, sleeves rolled-up and dark pants.

“My boyfriend is not the type of guy who will be in a music video,” Paris said.

“He’s a businessman and hates the spotlight. He’s not that type of person at all.”

“I asked Carter, ‘I know you’d never do this, but it’d mean so much to me. We’ll just shoot you from the back. There’s obviously no one I’d rather do this with, the song was literally meant for me and you.’ He said, ‘Yes,’ and I was so happy.”

Paris describes the music video as “one of my favorite videos I’ve ever done,” which also happens to be her longtime make-up artist Etienne Ortega’s first direction.

Paris and Carter began dating in 2019 after reconnecting at Thanksgiving with their families, although they have known each other for decades.

They celebrated their first anniversary last December, Paris sharing a tribute to her beau on Instagram.

“Happy 1 year Anniversary my love!? I love that we celebrate our love every month! I can’t believe it’s only been a year. It feels like I’ve been with you a lifetime!”

The post was a video montage of them spending time together.

“I have never felt so close to another person in my life. And that’s because you’re the first one who tore down the walls I built around my heart and opened up my heart in a way that I didn’t know was possible,” she continued.

“I truly believe that we were custom-made for each other and meant to be. Nothing in my life has ever felt so right or so perfect!”

While making an appearance on The Trend Reporter with Mara Podcast, she described Carter as her “dream guy,”and that she’s “100 percent sure he is the one for her”.

“I’m really excited just to move on for the next step of my life and finally just have a real life. Because I really do believe that having a family and having children is the meaning of life. And I haven’t got to experience that yet, because I didn’t feel like anybody deserved that love from me, and now I finally found the person who does.”

What are your thoughts on this? Are you happy for her? Let us know in the comments below.