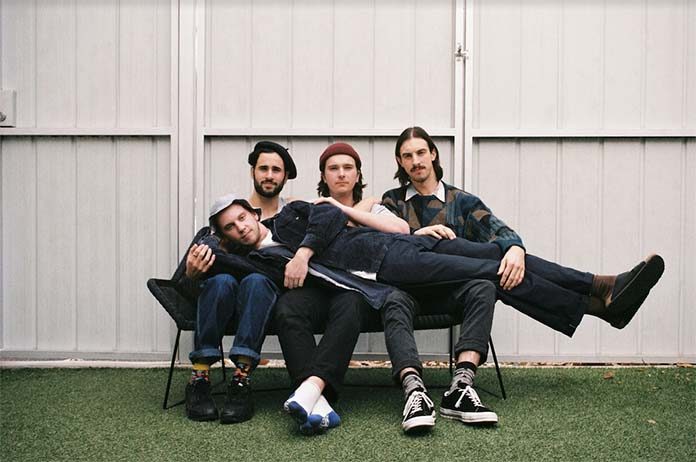 Harry from the Indie band MYLK recently stopped by Rave It Up HQ to chat about their new single Not My Fault and their upcoming show at Melbourne’s Grace Darling Hotel
Hey Harry. Welcome to Rave It Up. It’s a pleasure. Thanks for taking out some time to chat with us.

How long were you guys honing your craft before releasing any music?

As individuals, we have all been practicing and playing music for many years. Mylk isn’t the first band for any of us, so we all have a bit of live performing experience. However, as a band, we only had one rehearsal before playing our first gig and released our first song Day 4//Now about 2 months after that.

Did you start off doing pub gigs, busking etc?

At this stage of our careers, pub gigs are our bread and butter. We aim to play bigger stages hopefully in the near future. There are so many bands we would love to support and play alongside to learn more from and play to bigger crowds.

How did you come up with the name MYLK?

Mylk came from a nickname of our lead singer, Nathaniel. His very light blonde hair led him to attain the nickname milky. He was then offered a gig and decided he would go by the pseudonym Mylk. He then asked myself to play guitar, alongside him. Then we decided to fill out the stage with a full band and I asked friends from uni to join us, and we decided that Mylk worked as a band name, so it stuck.

You have just released your new track Not My Fault and you guys have said that the melody came first and then you just starting singing the words ‘Not My Fault’. Why do you think that particular line came to you guys first?

Nathaniel has always had an ability to just make up lyrics on the spot. Which really comes in handy when he occasionally forgets a lyric whilst we play live. Not My Fault is an instance where this was the case. We had the music down, and he was humming the melody, and all of a sudden started singing the words “It’s not my fault”. This then led to him coming up with the idea that the song would be about a bunch of weird scenarios that weren’t his fault.

The music video is also now up on YouTube for everyone to check out and it features puppies, hairdryers in the bathtub and a backyard amateur theatre. How come? Did you want to make it different from other videos?

We really try to make music videos that show people that we don’t take ourselves too seriously. We try to make our videos fun and accessible to everyone who watches them. Similar to the idea that the song was a couple of little stories that weren’t my fault, the video idea was to replicate this. We walked around the house we were filming in with our director Jack Wilson-Lee, and his producer, and started to just say some stupid ideas that made us laugh, and Jack did a great job on bringing it to life. We always aim to have videos that are different to others and that show our personalities.

There was a bit of acting involved in your video I see. Did you have fun with that?

It’s always great to be involved in something that pushes us out of our usual routines. We had a great time ‘acting’ in the video, and just playing around with friends, and making ourselves laugh.

You guys are celebrating the release with a show at Melbourne’s Grace Darling Hotel on August 23. For those people coming along, what can they expect?

We really take pride in our live performances, and I think we can all say that playing gigs is our favourite part of being in a band and making music. Mylk gigs tend to be a great time, at least for us, with a fun and safe environment for all encouraged.  We make sure that our recorded music is exactly the same as our live performances in terms of sound, and that the shows give everyone a memorable experience and an excuse to shake yo booty.

It’s unfortunately quite rare in this day and age for bands and artists to sound exactly the same as their recorded music when they perform live. I absolutely love that you guys always make sure it sounds the same. Keep it up!

We certainly do! We have thought about playing around with some added sounds in our recordings but, decided that it wasn’t us. What is the point of putting something in your music that people won’t hear when they come to see you live? We just want them to enjoy our music live or recorded.

What else can we expect from you guys in the future?

We are working on a couple of songs to record at the moment, and hopefully release them sometime soon. We won’t be going anywhere so long as we are still having this much fun, and I don’t think any of us see that changing any time soon.

What advice would you give to others who want to get into the entertainment industry and/or maybe start a band?

Honestly, just get out there and do it. One of the things I have personally been asked many times is “How do you get a gig?”. We just kept emailing venues and bands every week until we got a response, and it started from there. You would be amazed at how many venues and bands are looking for a band to help fill a line up. I know we are often looking around!

And before we go, if the listeners would like to contact you guys or find out what you are up to, where should they go?

Feel free to shoot through an email to us, or message us on Facebook, or Instagram. We are usually pretty quick on the reply, and love hearing from fans, and of course love hearing from people who want us to play at a gig!

Thanks again for having a chat to us today Harry. Keep in touch!