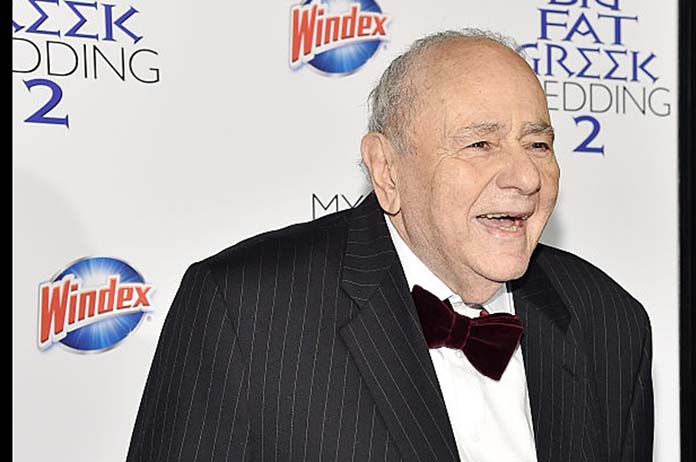 Grab your Windex and fix your broken hearts movie fans. Michael Constantine, who famously played Portokalos family patriarch Kostas “Gus” Portokalos in My Big Fat Greek Wedding, has unfortunately passed away at the age of 94.

Constantine’s family this week announced that the actor died on August 31, after being ill for several years. He passed away in his Pennsylvania home, surrounded by family.

Born in Reading Pennsylvania in 1927, Constantine was the son of Greek immigrants and was christened Gus Efstration. He got his start in New York as a theatre actor before branching out into television and film, where he achieved some small success.

His first award was for his role in comedy series Room 222, winning an Emmy in 1970 and being nominated for a Golden Globe. But his big break came in 2002 when he was picked to play Gus Portokalos.

My Big Fat Greek Wedding, written by lead actress Nia Vardalos, was a surprise hit and remains one of the highest-grossing romantic comedy films of all time. Gus is best known for his obsession with the cleaning product Windex, which he believes can cure any ailment. This became one of the standout soundbites of the film.

Vardalos has said she based the character of Gus, including the love of Windex, off her own father. She said his belief it was a cure-all started when he sprayed it on a wart, which dried out.

Constantine reprised the role in his final on-screen performance in the film’s 2016 sequel.

Speaking to Greek news network Hellenic News of America in 2017, Constantine said he had had “hundreds” of people send them Windex bottles asking for his autograph.

Constantine revealed that despite auditioning three times, he actually turned down the role at first.

“I was very leery. I didn’t know Nia then, and I was anxious about someone writing some Greek thing,” he said.

Vardalos tweeted a tribute to her former co-star when she heard the news of his death.

“Michael Constantine, the dad to our cast-family, a gift to the written word, and always a friend. Acting with him came with a rush of love and fun. I will treasure this man who brought Gus to life. He gave us so much laughter and deserves a rest now. We love you Michael.”

Send your condolences to Constantine’s family and friends by commenting below.