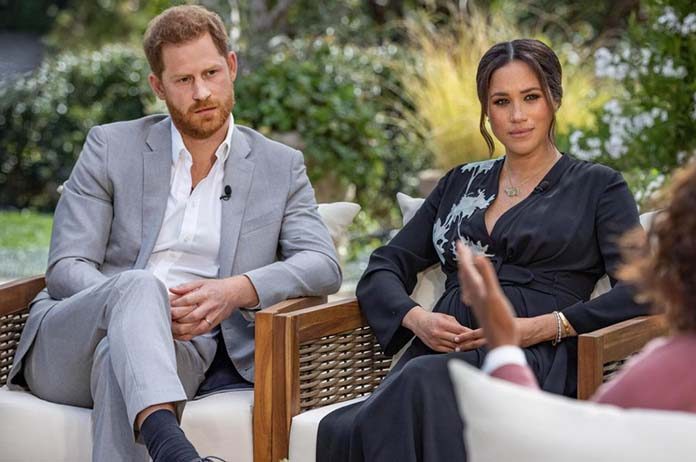 Meghan Markle has recently paid tribute to her late mother-in-law Princess Diana by showing off a piece of her jewellery during her recent interview with Oprah Winfrey.

During Meghan and Harry’s first public TV appearance since leaving their royal duties, she is seen to be wearing the sparking diamond tennis bracelet that was once owned by Princess Diana.

This perfectly beautiful piece was worn many times by Princess Diana in public before her death. It is believed Harry took the stones from the bracelet to create the engagement ring he proposed to Meghan with back in 2017.

Meghan has worn the bracelet before, seen wearing it during a royal tour back in 2018. She was also seen wearing a ring that was owned by Diana just before the wedding reception that year.

In the tell-all interview, Prince Harry told Oprah that Princess Diana would have been “very sad” about their choice to take a step back from the royal family.

“I think she would feel very angry with how this has panned out, and very sad. But ultimately, all she’d ever want is for us to be happy. He also stated that he has “felt her presence throughout this whole process.”

Meghan also stated that Queen Elizabeth II had previously given her a gift of pearl earrings and a matching necklace that she received on their first joint engagement.

Wearing Diana’s bracelet was just one fashion statement Meghan made for the interview.

Meghan was also sporting a gold and aquamarine necklace by British designer Pippa Small and earrings by Canadian jeweller Birks.

The couple also announced they were expecting their second child, which was then revealed by Prince Harry to be a girl.

“Meghan has brought awareness to a wider audience as to what ethical means and why it’s important.”

Meghan is known for choosing ethical and sustainable brands. She wore a gown by Stella McCartney to her wedding’s evening reception.

She was also named 2019’s ‘Most Powerful Dresser’ thanks to the global fashion search platform Lyst, which has stated in the past that her outfits had sparked, on average, a 216% increase in searches for similar pieces.

The black Armani dress Meghan was in for the interview was made entirely from silk and was produced in Italy. It is embroidered with lotus flowers, and has been described by the label as “sensuous with a subtle, refined twist.”