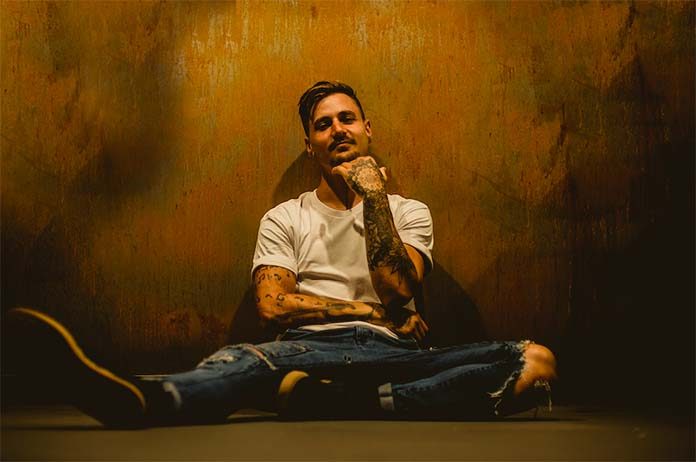 Upcoming pop artist Jayden McGrath recently stopped by Rave It Up HQ to chat about his debut single Conditions and his exclusive show at The Evelyn Hotel in Melbourne on June 7.

Hey Jayden. Welcome to Rave It Up. It’s a pleasure. Thanks for taking out some time to chat with us.

Thanks for having me!

It all began for me when I was around 14-years-old and was moving back to Australia after living in America for seven years. I was actually a competitive Ice Hockey player for the whole stint we did in America, and moving back to Alice Springs was quite a shock because there was no ice.. like anywhere. My dad was always musical and played the guitar so I started and quickly fell in love! We started gigging in pubs when we were 16, with the company of our parents of course. From there, the development of writing songs and playing more shows became natural and addictive. I was playing in rock and metal bands throughout my teens and 20s. It wasn’t until a few years ago, after taking on a radical shift in my life that I decided it was time to go out on my own and try to be a solo artist. So far I’m really enjoying it!

A big part of my passion for writing and playing guitar came from my parents. Mum has always been a massive fan of classic rock bands and flamenco style guitar, while dad was a blues guitarist himself and helped me get down the basics at a young age. I owe it all to them for buying me my first guitar!

Were there any other careers that you wanted to pursuit when you were younger or was it always music?

Ice Hockey was a major one for me but I ended up down a different path. I suppose the only other industry that has really called me over the years is teaching yoga. After doing my 500-hour teacher training in Thailand, I have such a deep love and appreciation for yoga and its philosophy!

Sure! There are always going to be haters and to be honest, I was introduced at a young age, moving country and having a different accent. I think I’ve learnt a lot about loving and appreciating myself through them to be honest. Of course it can get to you and make you feel down but mostly, it just makes me laugh and a little sad for them and what they are going through.

There are definitely new challenges that have presented since taking the step into being a solo artist. Mostly the workload I’d say. Now I need to be on top of everything myself, but I enjoy it and it gives me a particular drive that I have never encountered. Plus being able to write whatever I want, whenever I want is pretty awesome!

Your debut single Conditions is out on May 31 and it’s about the feeling of acceptance towards less-than-ideal circumstances in life. We hear that it is based on your real life experience of being in a rather dark period of your life. Can you tell us about this? What made you want to write a song about it? Was it like writing a diary? Was it therapeutic?

There was a lot going on in my life at this period of time. After a breakup, I decided to start learning more about myself by unravelling some of my past to help with my depression and anxiety. Conditions to me is exactly that, a screenshot of my thoughts at that time. Encompassing loss, unacceptance and emotional turmoil. What doesn’t kill us makes us stronger but even the strongest have days or weeks where all of a sudden nothing is working and we want to give up. This is like my reminder song to myself to keep going when life is shit.

Luckily things have changed for you and you are no longer in that dark place but do you have any advice for our readers who might be going through a similar situation at the moment?

I would advise people to talk. Let someone know what is going on. You will be surprised at how much it helps. State of mind is everything and if there is toxic stagnant energy trapped in your body, you need to bring it up, deal with the problem and move on or it will continue to manifest…This is only my opinion though. Do some Yoga!

Do you think you wrote the song to help others going through a dark time or to help yourself? Or both?

I definitely write most songs about personal experience with the thought of how people perceive it in mind. I would like to say I’m trying to help people because the thought of that makes me happy, but not everyone has had the same experiences as me so they will perceive my stories differently.

The music video is a dark, hypnotic reflection of that feeling of strange contentment and it was your concept. How did you come up with it? What was the inspiration behind it?

I suppose I’ve always had a bit of an obsession with Dark themes. I really wanted to portray the way I see the world on my darkest days. The feeling of disconnect and not really belonging. That’s where I came up with the idea for the emoji to represent people’s emotion. Maybe in the future, this is how the world will really be, but I really hope not…Say hello to a stranger it may change your day in a good way!

It has been a long road for you to get to this point. Were there any times where you just wanted to give up? If so, what pushed you through?

Sure! I have had self doubt most of my life so this is one of the biggest steps I’ve ever taken. I’m really lucky to have such an amazing support network around me to keep me motivated and confident. Having a bit of a different sound can play tricks on you and sometimes you need the opinion of another to keep it going.

You will be celebrating the release of Conditions with a launch at The Evelyn in Melbourne on Friday June 7. For those coming along, what can they expect from the show?

We have been working really hard to put together a well-rounded show for this project and on the 7th. There are a few instrument changes, guitar solos, electronic soundscapes and even some drum and bass! I really want people to enjoy the show from start to finish and after a lot of hours of refining, I’m confident they will and I am really excited to play!

I think people can just expect me to keep being me. That means more songs from the heart and more shows!

Any plans to tour Australia in the future?

Yes! We are still in the early stages but most definitely keen to get out there again!

We hear that you love to use songwriting as a way to tell your story. Can we expect more amazing songs in the future that will help others going through a difficult time?

I have written quite a few more songs of that nature already so yes…I think its really important that we as humans help each other out and as long as my mind is in this space, I will try and do so.

What advice would you give to our readers if they would like to follow their dreams of becoming a singer?

Sing in the shower! Haha. Just don’t put too much pressure on yourself. Singing is temperamental and can change from day to day as your voice is developing. Practice and patience.

Now we do have a question that all of your female fans would like to know the answer to….Are you single?

Haha! Yeah I think I will be for a while…I have a lot of things to accomplish personally and still some stuff to work out. But who knows, life’s funny.

Don’t drink milk, you’re lactose intolerant and you have no idea!

Thanks again for having a chat to us today Jayden. Keep in touch!

Thank you so much for having me! Until next time, all the best!

Buy your tickets now for Jayden’s launch show at The Evelyn in Melbourne on Friday June 7 right here.