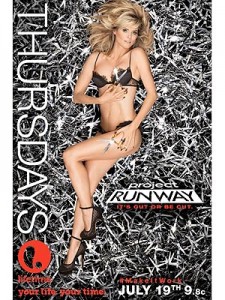 Last year, Project Runway host Heidi Klum shed her clothes to kick off the new season of the show.
But for season 10, Klum “covered up with lingerie” and lounged atop hundreds of pairs of scissors.
The model, who is no stranger to out-there photo-shoots or posing nude, admits that she was a little scared by the prospect of blades at her back.

“I got to the shoot and I thought they’d add the scissors in editing afterward,” she tells PEOPLE. “But nope, they wanted me to lie down right in the middle of the pile!”

Project Runway‘s upcoming season debuts July 19 (in America) with designer and stylist Patricia Field and Parenthood actress Lauren Graham on board as the first set of celebrity judges to meet this year’s 16 contestants, who just faced off in their first elimination challenge on June 15 in Times Square.

Tell me your thoughts. Comment below or email me at lozza@raveituptv.com