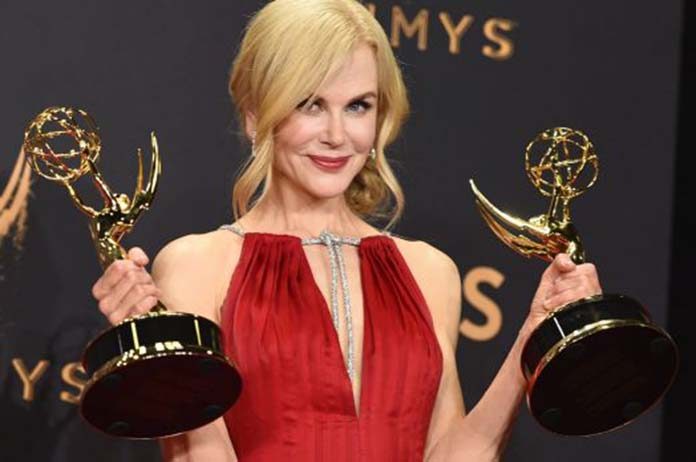 The 69th Primetime Emmy Awards ceremony was held on Sunday September 17 at the Microsoft Theatre in Los Angeles.

Kidman teared up as she accepted the Best Lead Actress award for her role as an abused wife on Big Little Lies.

She thanked her husband and children.

“I have a huge artistic family who supported me throughout all my ups and downs. You have been so loyal to me throughout my whole life thank you for that,” she said.

“I have two little girls – Sunnie and Faith and my darling Keith who I asked to help me pursue this artistic path and they have sacrificed so much for it.”

“At long last Mr President, here is your Emmy,” Baldwin said in his acceptance speech.

Elizabeth Moss won best actress in a drama series for The Handmaid’s Tale. It was her first Emmy after nine nominations.

Moss thanked her mother saying, “You are so brave and strong and smart, and you have taught me that you can be kind, and a f***ing badass.”

Here are the full list of winners: (winners indicated in red)

Viola Davis, “How to Get Away With Murder”
Claire Foy, “The Crown”
Elisabeth Moss, “The Handmaid’s Tale”
Keri Russell, “The Americans”
Evan Rachel Wood, “Westworld”
Robin Wright, “House of Cards”

Outstanding Supporting Actress in a Limited Series or Movie

Outstanding Supporting Actor in a Limited Series or Movie

Outstanding Directing for a Comedy Series

Outstanding Writing for a Drama Series

Outstanding Writing for a Comedy Series

Outstanding Directing for a Drama Series