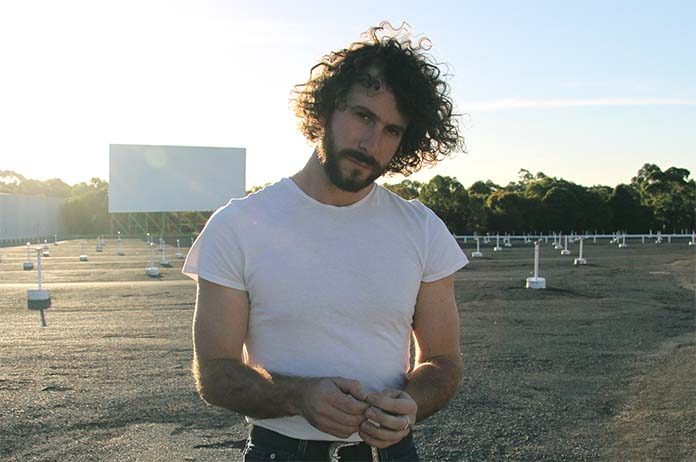 Melbourne based Americana/Folk artist Dan Parsons recently stopped by Rave It Up HQ to chat about his new album Sunday Morning Cinema.

Hey Dan. Welcome to Rave It Up. It’s a pleasure. Thanks for taking out some time to chat with us.

You grew up in the small town of Cedar Creek so where did you originally find your love for music?

To put it simply, I was always moved by music. From a very early age, I always found what I liked amongst the music available to me and devoured it. I’d say my parents were very instrumental in fostering my relationship with music – playing music throughout the house constantly and being musical themselves helped me to connect to it in a spiritual, meaningful and ultimately a practical way.

Was music what you always thought of doing as a career when you were younger?

I made a decision to pursue music as a career and lifestyle when I was 15. Not much changed as far as the dedication or motivation after I’d made the choice. It was always there. I just realised that it was something that I could aim for, professionally.

Before even finishing school, you regularly performed solo in local venues. How did you find that in the beginning? Was it hard to get those gigs at first?

Those first gigs were booked through a schoolmate’s older brother, whose friend was the booker at a bowling alley called ‘The Alley Bar’. A fantastic venue where a lot of great Brisbane acts hot their start. I was underage but no one cared – we just wanted to play and they loved us.

Did you have any issues with stage fright too?

Never had issues with stage fright, initially. Of course, the more experienced I became, the more self doubt I accumulated! Seems to be the way it goes; but no, never full on stage fright.

Throughout your time in the industry, have you had any issues with haters? If so, how do you deal with them? Does it ever put you down?

I received one terrible live review back in 2009, and it really shook me up. I was out for blood! This dude, I forget his name, was just an sub par writer, whom I believe confused being honest with being spiteful. You just get on with it – the sooner you realise not everyone is going to like you or like what you do, the easier it becomes.

You are very inspired by the early 70’s style of music. How come? Did your family always play it in your house growing up?

That style of music just really makes sense to me. My innate musical sensibilities and inclinations continue to parallel the styles and techniques of that time period. It’s not a conscious thing, but I could see how someone would think that it might be.

You’ve worked with some of Australia’s finest artists. For example, the very talented Kate Miller-Heidke. How was she to work with?

Kate was amazing to work with – a very focussed and naturally talented performer. Very inspirational and supportive, actually. I learned a lot just by being around her, much less the conversations we would have about songwriting, performing and the nuances of the industry.

You’ve also played solo and with a band. What do you prefer?

A tough question. Both are incredible for different reasons, but I would have to say playing with a band. A shared experience is an invaluable thing.

You have a new album coming out on August 10. Can you tell us a little bit about the process of putting this together? Is it true it only took you 4 days to record it all?

I really wanted to challenge myself. Playing together with a band and capturing the sound as it comes out can be a daunting and confronting experience. You really hear it for what it is. In the past, I’d spent a lot of time in recording sessions trying to perfect performances and let myself get in the way of the song. I was tired of allowing myself the means to do that, so this time around I wanted certain limitations. Recording to tape with no computer will give you those limitations. We recorded 10 songs in 3 days – the 4th day was just me doing some percussion and harmony overdubs.

How long was the songwriting process?

Maybe one year? I wrote more songs than I needed, which is rare for me. We only used 9 of about 11 songs and other some loose ideas I had. The others just didn’t seem to fit – we made that decision quite late in the game once we had almost finished mixing the album. An album will kind of reject what it doesn’t need.

What is your favourite song off the album? Which track should we check out first?

I really like the song Dream on Lover. I wrote it very quickly with my friend Josh Rennie-Hynes, a great songwriter and singer. The recording came together just as easily as the writing of it – 2nd or 3rd take, I believe. I love Ben Franz’ pedal steel playing on that song as well as Alex O’Gorman’s unusual bass approach. Most bassists would use their thumb for a tune like that but Alex found a great sound with a pick and not a whole lot of notes.

Why did you decide to name the album ‘Sunday Morning Cinema’?

I got the title Sunday Morning Cinema from a photo I’d taken years ago – the credits rolling, the house lights still down, my boots up on the seat in front of me. A real hypnotic, peaceful vibe. I’d captioned it with ‘Sunday Morning Cinema’, not thinking much about it at all. Fast forward a few years, on a morning just before we recorded the new album, I wrote a song in about 15 minutes before rehearsal and for some reason that title came back to me and there it was – a new song and the title to my new album. Probably the fastest song I ever wrote. The song is really using the movies as a medium for dreaming and escape, as it always has been. Perhaps one of the last vestiges of true romance.

You have also announced tour dates for your Sunday Morning Cinema Album tour. For those coming along to one of the shows on your tour, what can they expect?

The tour will feature myself (acoustic and electric guitar), Alex O’Gorman (bass) and Bree Hartley (drums). We all sing, which is fun. We’ll play the album in full and also some songs from my previous albums ie Valleywood and my self titled release.

Will you have any supporting acts that you can share with us?

We have Jen Mize for Brisbane (Black Bear Lodge) on August 11, Demi Mitchell in Sydney (Leadbelly) on August 26 and finally Charm of Finches in Melbourne on September 2 at The Northcote Social Club.

You’ll be visiting Bellingen, Brisbane, Sydney and Melbourne, but where are you most excited to visit?

I always enjoy going back home to Brisbane. The weather’s fantastic, the people are great and they love alt country/folk/roots music. It’s a strong vibe there.

Do you get some downtime to enjoy these places too when you’re not performing?

Not really, not as much as I’d like. It’s usually in and out. Trying to save a dollar is important – too much spare time and I’ll spend it all!

I would love more people to hear my music. It’s easy to make records these days, it’s a lot harder for people to hear it…to break through the noise. I just want to keep making purer music. Not purer in terms of the sound necessarily, but in my approach and relationship with it.

What advice would you give to our readers if they would like to follow their dreams of becoming a singer-songwriter?

It’s a hard life but it’s a real good one – Particularly if you have the support of your loved ones. It’s a lifestyle and a life-force – if it moves you enough you’ll stay with it.

Now we do have a question that all of your female fans would like to know the answer to….Are you single? (If so, what do you look for in a partner?)

I am single! I look for someone who is kind, thoughtful and confident.

Be open to exploration and experimentation. That’s where the gold is! And not everything can or is supposed to feel amazing 100% of the time. Peaks and valleys, man.

Thank you so much for your time today Dan!