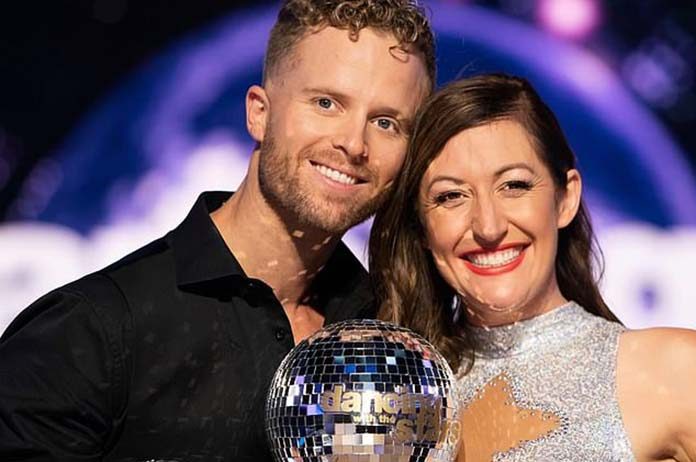 The winner of Australia’s Dancing With The Stars 2020 has been crowned.

It was a tough night for the judges’ favourite, Karvan. Although she led with a score of 60, viewer votes dropped her down to third place.

An unfortunate technical error saw an ad break cut into her final dance, causing viewers in some regions to complain that they barely saw any of the routine.

The show later apologised for the error and posted Karvan’s full dance online.

“We apologise for the technical difficulty that unfortunately saw some of our amazing fans miss this incredibly perfect performance! Here is Claudia and Aric’s routine for those who missed it!” they tweeted.

Hosts Amanda Keller and Grant Denyer opened the show by acknowledging that the season hadn’t gone as planned, with the coronavirus pandemic forcing some last-minute changes.

“Normally for the grand finale, we would be packed to the rafters with screaming fans, but not tonight,” Denyer said.

The hosts addressed any concerns about the contestants and their partners not practicing social distancing.

“As you can imagine, it is difficult to socially distance when you’re ballroom dancing. Our celebs and their partners and all of our dancers have spent long hours everyday for the past few months,” Keller said.

“Of course, the health and safety of our cast and crew is paramount and we are following all the necessary government guidelines that are currently in place.”

The coronavirus threw this season into chaos and the finale had to be brought forward by a week.

As a back-up plan in case airports were closed, Channel 10 had cars standing by in case Denyer and Keller, who live in NSW, weren’t allowed to fly to Melbourne for the show.

Judge Craig Revel Horwood had to fly home to England appeared via a TV monitor.

What were your thoughts on the finale? Let us know by commenting below.