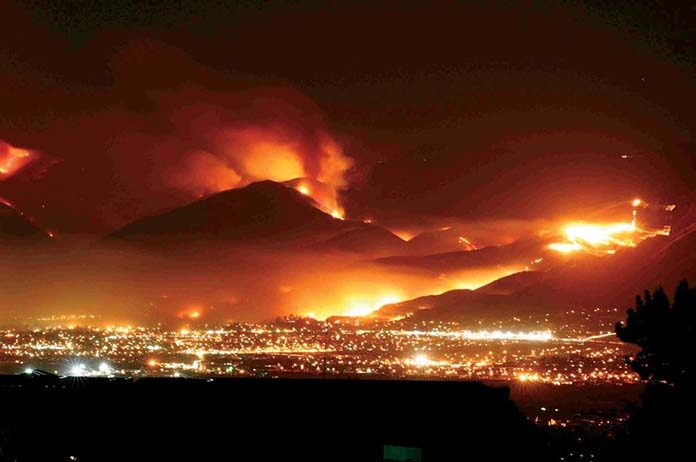 The most famous faces from the movie and music industries have been deeply impacted by the deadly California wildfires.

Many celebrities were evacuated from their homes when the warning of the wildfires were made, including Kim Kardashian West, Will Smith, Alyssa Milano, Cher and Iggy Azalea, just to name a few.

The fire has destroyed more than 7000 structures across the state, has taken out everything in its way and has reportedly killed 42 civilians.

The fires have caused over $2.975 billion in damages, including $1.366 billion in fire suppression costs.

Reality star Kim Kardashian took to Twitter on Saturday telling fans that their house was also affected by the fire and that her family were safe. In another tweet, West went on to thank the fire fighters for keeping everyone safe.

I heard the flames have hit our property at our home in Hidden Hills but now are more contained and have stopped at the moment. It doesn’t seems like it is getting worse right now, I just pray the winds are in our favor. God is good. I’m just praying everyone is safe ??

Fire Fighters, I love you and thank you for doing all that you can to keep us safe!

Marvel’s Doctor Strange director Scott Derrickson took to Twitter confirming the news that he had also lost his home during the wildfires. He later on posted a photo of his house after the fire had destroyed it.

We lost our home, but we are all safe and that’s the important thing. Gonna be offline for awhile.

Just a quick update to say that I’m overwhelmed by the incredible outpouring of love and support. Thank you to everyone who messaged me, and for the dozens upon dozens of you who offered us a place to stay. We are blessed and grateful to be safe and so loved. ???? pic.twitter.com/5i4InDTs8S

Ex-One Direction member Liam Payne took to Twitter saying that he thinks he’s about to lose his house and his memories.

My heart goes out to everyone caught in the fires please stay safe and don’t take unnecessary risks. I think I’m about to lose my house and its memories ?even worse tragically people have died thoughts and prayers with everyone it’s been a tough day let’s hope it gets better ??

The home of American singer-songwriter Robin Thicke was destroyed by the fire. Thicke took to Instagram showing how close the fire was to his home.

Our home is just to the left! Praying

Hannah Montana star Miley Cyrus has lost her entire home during the wildfire. The singer brought the property back in 2016 for $2.5 million. The 25-year-old took to Twitter informing fans that she has lost her home and encouraged friend and family to stay strong.

Completely devestated by the fires affecting my community. I am one of the lucky ones. My animals and LOVE OF MY LIFE made it out safely & that’s all that matters right now. My house no longer stands but the memories shared with family & friends stand strong. I am grateful for

Canadian singer-songwriter Neil Young has also reported to have lost his home in the fire. Young posted a statement on his website where he went on talking about climate change.

“We are vulnerable because of Climate Change.”

Many other celebrities took to Twitter informing people about their homes being affected while offering their love and support to the people affected.

I’m worried about my house?, but there is nothing I can do.
Friends houses have burned??
I can’t bear the thought of there being no Malibu I’ve had a house in Malibu since 1972?

Fire Fighters, I love you and thank you for doing all that you can to keep us safe!

There’s a lot of unknowns tonight… but what we do know is we are here for you and as a community we will help in any way possible. Immense gratitude to all the brave first responders out there putting their lives on the line for so many families. #CaliforniaFires