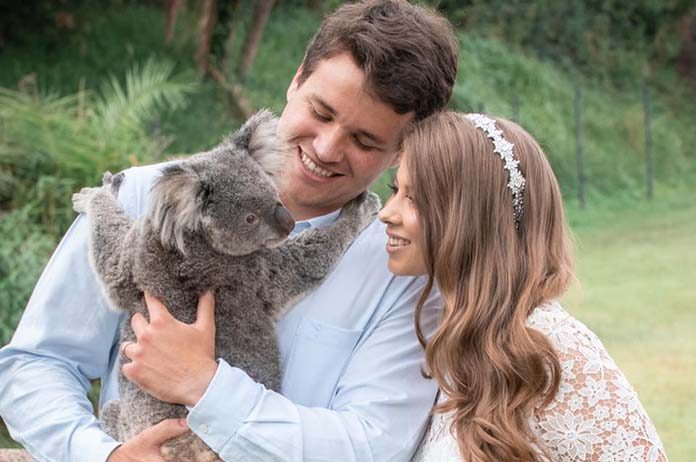 The 21-year-old daughter of the late crocodile hunter, Steve Irwin married Chandler Powell on March 25, after being forced to change their wedding plans because of restrictions placed on wedding ceremonies due to the coronavirus pandemic.

While there were very few human guests, there were plenty of animals present at the ceremony and Bindi’s brother Robert walked her down the aisle.

“We thought about postponing, because you want to share this day with everyone, but when it boiled down to it, we both just said, ‘Look, we desperately want to get married, and no matter what the future holds, at least we’ll be husband and wife. We can take on the world together'”, Irwin said.

Her mother Terri inspired her dress, which was found at Paddington Weddings. The sleeves featured a sunflower lace detail that reminded Bindi of her family.

“When we would go on projects and drives together, we’d often drive through these huge sunflower fields in the middle of nowhere and we always stopped to take them in,” she said.

The couple paid tribute to Steve with a picture of him nearby as they exchanged vows. They also lit a candle in his memory and her bouquet was tied together with a khaki ribbon.

The newlyweds first met in 2003 when Chandler was in Australia for a wakeboarding competition and Bindi happened to be giving the tour he was on.