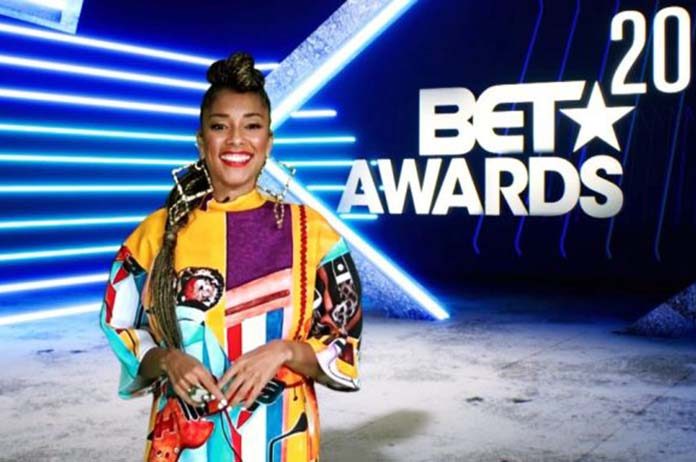 The 2020 BET awards were held this week.

The ceremony, which celebrates African American and other American minorities in the entertainment industry, was held virtually due to the coronavirus pandemic.

Along with honoring black creatives and culture, the focus of the “Our Culture Can’t Be Canceled” themed night was the protests happening around America sparked by the deaths of George Floyd, Breonna Taylor and other black people killed by police.

Actress, comedian, and television personality Amanda Seales hosted the show and delivered a monologue addressing the current state of the country.

“Now, folks always say, ‘All Amanda ever does is talk about race.’ Well listen, I would love to talk about regular, everyday things, but racism always beats me to it,” she began.

Seales mentioned the names of Treyvon Martin and Botham Jean, who were killed by police, and pointed out that Breonna Taylor’s killers have still not been arrested.

“We deserve a break. When I say, we, I mean all us black folks watching the kneeling, the ‘I take responsibility’ vids and saying to ourselves, ‘Wow, y’all goofy.’ Because America is acting brand-new about racism,” she said.

Rapper Roddy Ricch won Album of the Year for Please Excuse Me For Being Antisocial and DJ Khaled featuring Nipsey Hussle and John Legend won Video of the Year for Higher.

The BET Her Award, which recognises traditional R&B artists, was awarded to Beyoncé for her song Brown Skin Girl, which features WizKid, Saint Jhn and her daughter Blue Ivy Carter. Beyoncé also won the Humanitarian award, presented to her by former First Lady Michelle Obama.

There were also performances paying tribute to stars who have passed away.

Lil Wayne honored the late L.A. Laker Kobe Bryant with his 2009 song Kobe Bryant. The performance included a video highlighting moments from his career and his daughter Gianna, who died in the helicopter crash along with her father in January.

The full list of nominees and winners are listed below: (winners indicated in bold)

Album of the Year

Cuz I Love You – Lizzo
Fever – Megan Thee Stallion
Homecoming: The Live Album – Beyoncé
I Used to Know Her – H.E.R.
Kirk – DaBaby
Please Excuse Me For Being Antisocial – Roddy Ricch

Video of the Year

Video Director of the Year

Sportswoman of the Year

Sportsman of the Year