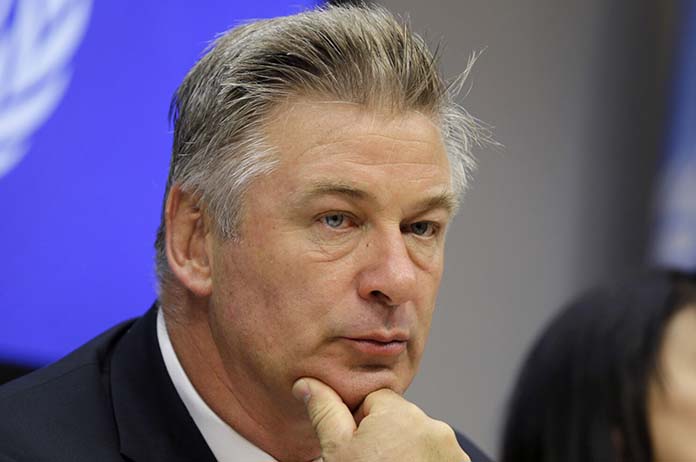 This past week saw the tragic death of 42-year-old Ukrainian born cinematographer, Halyna Hutchins, after being accidentally shot by American actor, Alec Baldwin, on the set of Joel Souza’s western drama, Rust.

According to police reports and eyewitness statements, the assistant director was under the impression that the gun he handed to Baldwin was ‘cold’, a term used to identify an unloaded gun. Baldwin then proceeded to fire what he presumed was a prop gun, instead a live round was in the chamber which ultimately killed Halyna Hutchins.

Those who were on set, as well as sources close to Baldwin, claim that he was hysterical for hours following the shooting, with images of a distraught Baldwin bending over and crying outside of Santa Fe County Sheriff’s Office quickly going viral.

Halyna’s husband of 16 years, Matthew Hutchins, and their nine-year-old son met with Baldwin for breakfast today, with Baldwin pictured hugging Matthew outside their hotel following the meeting.

Halyna’s father, Anatoly Androsovych, spoke on behalf of his entire family in an interview with the Sun Newspaper and made it clear that his family did not blame Baldwin.

“We still can’t believe Halyna is dead, and her mother is going out of her mind with grief, but I do not hold Alec Baldwin responsible, it is the responsibility of the props people who handle the guns,” said Androsovych.

Regardless of who the internet thinks is to blame, the Sante Fe County Sheriff’s Office has not charged anyone for the death of Hutchins, as of yet.

However, the crew have pointed the finger at the armourer. The job of the armourer on a movie set is to oversee all the weapons that will be used during production, as well as give their advice on appropriate weapons for certain periods of time, to assist with accurate representations of firearm use.

The armourer for Rust is 24-year-old Hannah Gutierrez Reed, who controversially on the set of another western drama, The Old Way, starring Nicolas Cage, handed an 11-year-old a gun without assessing if the gun was safe and unloaded.

The Crew of Rust alleged that Reed was “a bit careless with the guns, waving it around every now and again,” said an anonymous crew member.

Reed sat down on the Voices of the West podcast to discuss her life as an armourer and the opportunity to work as a lead armourer for the first time in the aforementioned film, The Old Way. Reed mentioned that she almost did not take the job because she did not feel ready.

Reed admitted on the podcast that certain aspects of her job are still unknown to her, stating that loading blanks was scary for her.

“I think loading blanks was the scariest thing to me because I was like ‘oh I don’t know anything about it,’” said Reed.

Following the death of Hutchins and the ongoing Police investigation, Reed has deleted her social media accounts and has not been seen in public since.

The film started production on October 6, 2021 and had not been underway for more than two weeks before the death of Hutchins. There is however still no date for production to resume.