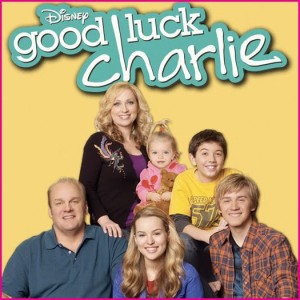 Disney Channel’s “Good Luck Charlie” actress Leigh-Allyn Baker is having another baby boy. Not only did she just have a baby boy on the show, and she has a 3-year-old son at home, she is also currently pregnant with another baby boy, which is due in September 2012.

I was really excited it was a boy. Even though I would love a little girl for me personally, I love being a mom to boys. And I kind of wanted Griffin to have a same-sex sibling. They’ll certainly have more in common, and it will be easier to develop a friendship when they’re the same.

Leigh is currently planning on naming her son Jasper James! Do you like the name?

Leigh also revealed that after she delivered the baby on “Good Luck Charlie” she made the announcement to the cast and crew that she was expecting a baby in real life!

I said, ‘Now that we’ve had a baby, I guess I should tell you all, I’m pregnant.’ People laughed because they thought I was making a joke of the fact that Amy Duncan had so many kids. And I had to say, ‘No, I’m really pregnant!’ They were really surprised and really happy.”