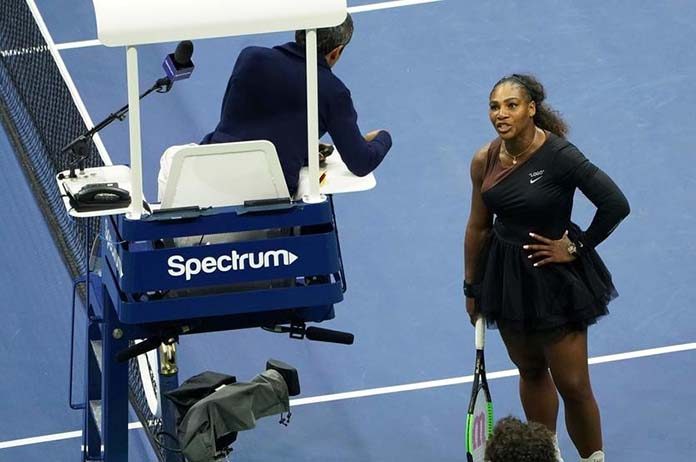 Serena Williams has been fined up to $24,000 after her outburst yesterday at the US Open.

Williams had lost the finals to Naomi Osaka as debate over whether the code violations that sparked her meltdown were sexist.

American tennis great Billie Jean King took Williams’ side praising her for standing up to the umpire. Umpire Carlos Ramos penalised Williams for her comments that a male player could have gotten away while a female couldn’t.

This year, the former world no. 1 was seeking for her 24th Grand Slam Title but lost to Japan’s Naomi Osaka 6-2, 6-4 victory. Osaka is the first 20-year-old Japanese to win a Grand Slam title.

This is the first major final that Osaka has played against the Queen of Tennis, who she has idolised as a kid. Osaka has also beaten 2017 runner-up Madison Keys.

Williams demanded umpire Ramos apologise to her for handing her a coaching violation where she went on calling the umpire a “thief” for giving her a penalty.

“I have a daughter and I stand for what’s right for her. I’ve never cheated, and you owe me an apology.

“You will never be on another court of mine as long as you live. Say it. Say you’re sorry.”

Williams has accused the US Open that they are out to get her.

“Always something happens to me here,” she huffed at referee Brian Earley.

“Because I’m a woman you’re going to do this to me.”

The 36-year-old was determined in her post-match press conference that she did not receive any coaching even though French tennis coach Patrick Mouratoglou’s claims that he had signalled her from the box. Williams has no regret as she believes she “stood up for what she believed in and stood up for what was right.”

“You definitely can’t go back in time, but I can’t sit here and say I wouldn’t say he’s a thief because I thought he took a game from me.”

“I’ve seen other men call other umpires several things and I’m here fighting for women’s rights and for women’s equality and for all kinds of stuff, and for me to say thief and for him to take a game, it made me feel like it was a sexist remark.

“He’s never taken a game from a man because they said ‘thief.’ For me it blows my mind. But I’m going to continue to fight for women and to fight for us to have equal. Like Alizé Cornet should be able to take her shirt off without getting a fine, like, this is outrageous.