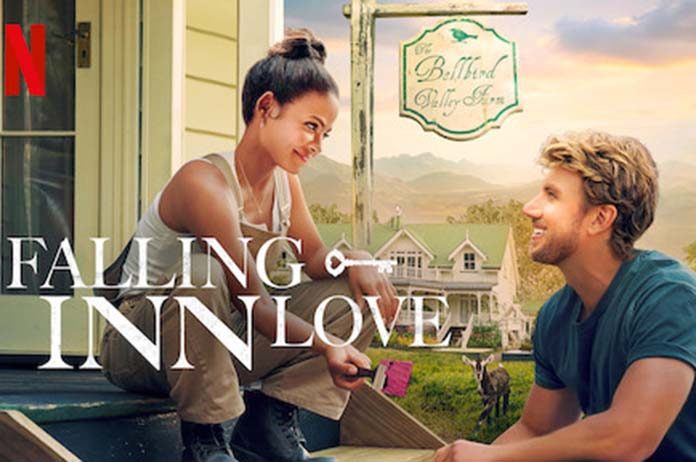 What can be said about Falling Inn Love? Well for starters, this is definitely a major rom-com movie.

A corporate executive enters a contest to ‘Win an Inn,’ and after winning, flies to New Zealand for a getaway and to see her new estate. Come to realise the inn isn’t exactly what she set out for. A massive fixer-upper but with the help of the local community and a mischievous goat on the loose, she manages to turn a run-down, old-fashioned house into a beautiful, eco-friendly, energy saving inn with a great view and a house pet.

Gabriela Diaz (played by Christina Milian) and Jake Taylor (played by Adam Demos) are the two main characters of the film. First meeting in an awkward way, (her suitcase crashing into his ute), then becoming frenemies, to which they join partnership in order to renovate this inn and make it whole again.

With the help of the town, they manage to pull through and create/design something worthwhile and beautiful. Along the way, they find a pile of beautiful love letters written between two lovers from the days of World War 1. Known by the names ‘Firefly’ and ‘Lion,’ they became the basis for what both Jake and Gabriela wish to gain at some point in their life.

Now onto Gilbert the goat. Gilbert (in my opinion) is the best character in the film. He is funny, mischievous, beguiling and all around just a cockblocker. He is invasive and persistent but that’s what makes him the most relatable character in the movie. When you think there’s a sweet, romantic scene about to happen or maybe something worth paying attention to, Gilbert comes along and steals the show.

Most people probably wouldn’t want to sit down and watch a cheesy, predictable romantic comedy, but I (in my most honest opinion), would definitely recommend taking the time to sit down with family, friends, your significant other, or even just yourself and have a quiet, relaxing night in and watch it. It will make you laugh and cringe but all in all, it’s a good experience.

Want some reasons why you should take the time and watch it? Here you go…

So knowing what you know now having read this article, would you watch it and what do you think of Netflix coming out with movies that should belong on the Hallmark Channel? Let us know in the comments below.