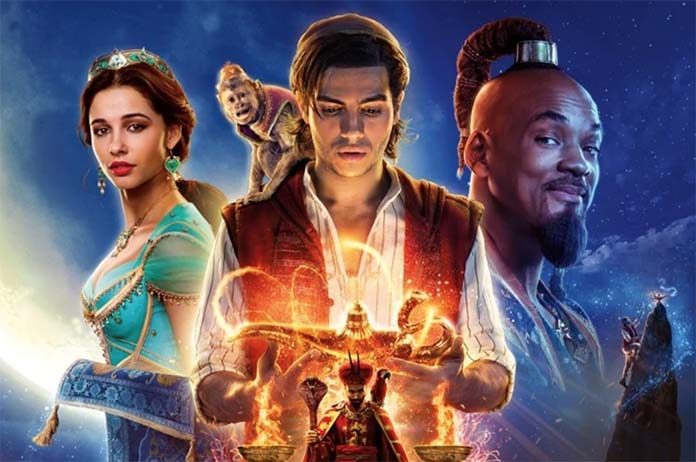 Thieving, lying, male dominance, female empowerment and the mystery of magic. The 2019 Aladdin remake will immerse you in all these themes while you consider whether or not you loved it as much as the original.

For those who have grown up with the cartoon version of Aladdin, this new live remake exceeds expectations. As someone who loved the 1992 version and has watched it over 100 times since first seeing it, I had extremely high expectations and was skeptical of how it would turn out. But even after having suspicions, I was pleasantly surprised at how similar it was to the original. The 1992 version was made from the folklore of Aladdin which was added to The Book of  One Thousand and One Nights (The Arabian Nights), an ancient Arabic text in the 18th century. There are some differences within the new film but most of it was really similar to the original. The director Guy Ritchie, who is better known for his gritty crime films, made sure to pay homage to the messages and themes of the original. Here are some the great things about the film and some of the things that could have been done differently.

1. Will Smith in his portrayal of the Genie: As someone who loved Robin Williams in the original and thought no one could play the part other than him, I was surprised at how much I loved Will Smith as the Genie. Even though he had big shoes to fill and had to make sure he didn’t stray too far from the original character, Smith changed it up a bit and made the character his own. While Robin Williams took his comedic experience from stand-up comedy and applied it to the character of the Genie, Will Smith added a more modern, sarcastic element to the Genie.

2. The movie soundtrack: Growing up my favourite song from the original soundtrack was One Jump Ahead and the live remake does a terrific version of it while adding reprises later on in the film. After seeing this new remake though, my mind changed to loving all the songs the same, especially since there has been a new take on the sound. While the original soundtrack is classic and they’re songs that everyone can recognise, composer and songwriter Alan Menken (who wrote the songs for the original), changed them to fit a new generation of people. While Robin Williams took his comedic side and implemented it into Friend Like Me, Will Smith took inspiration from his Fresh Prince of Bel-Air days and implemented a more hip-hop vibe into the song. Another difference in the new film is that Princess Jasmine actually has a song. I was surprised when Naomi Scott (who plays Princess Jasmine in the remake), started singing an incredible and uplifting solo about her struggles with not being able to have an opinion. If anyone is having a hard time with feeling like their voice isn’t being heard, listen to Speechless as it makes people feel empowered and important.

3. Cast: There has been some controversy around about whether Will Smith was fit to play the Genie. My opinion…. YES! Will Smith showed me a new side to the Genie which I loved. He contributed to the role in a way in which I never thought I would see. While keeping up the Genie’s hilarious commentary and storyline, he brought laughter and joy to the entire cinema. Mena Massoud who was cast as Aladdin was perfect for the role. He portrayed the character in a more modern way whilst keeping elements of the original, and Naomi Scott who was chosen to be Princess Jasmine succeeded in her role. Even though she is a British actress, her portrayal was one I’d gladly watch again.

4. Similarities to the original: There are many similarities to the 1992 version that make the fans of the original say “Hey, that was in the original”, and “they kept that from the original, good”. For instance, the animals and objects. Abu the monkey, Iago the parrot, the magic flying carpet and Rajah the loving, protecting tiger. All the characteristics of these characters were close to spot on compared to the original. Abu is still the thieving, conniving rascal we loved from the original and still turns into an elephant during Prince Ali. The magic carpet is still as sweet, loving and charismatic, and Iago is still evil with a taste for power. Another similarity is the romance between Aladdin and Princess Jasmine. Yes so it is a bit different in some ways but the true underlying message behind it is still there, and we can’t forget about Jafar and his magic staff. Jafar still possesses the ability to hypnotise people and still wants nothing more than to become Sultan, and eventually the most powerful being on Earth.

There were some parts of the film which could have definitely been done better. For instance: The casting of Jafar and the characteristics of the Sultan. In the original the Sultan is a short, jolly fellow who is always jumping about, whereas in this remake, he is a more subtle, wise man who cares majorly about justice and what is right for the kingdom. In the original, Jafar is a menacing, terrifying, overpowering character who has nothing on his mind but becoming Sultan and gaining the lamp. While his intentions are the same, he just isn’t as scary and threatening as he is in the original. Although both Marwan Kenzari (Jafar) and Navid Negahban (The Sultan) played their roles spectacularly, it was a little surprising to find the film had drifted from the 1992 version when it came to their characteristics.

Now the High Guard to the Sultan Hakim (Numan Acar) looked a lot more like Jafar in the original. In my opinion, there was a casting fault there and I was surprised to find that Will Smith had turned down the part of the Genie at first but all in all, it was a wonderful take on a classic Disney movie and I highly recommend taking the time to see it.

Have you seen this Aladdin remake? What were your thoughts? Let us know by commenting below.