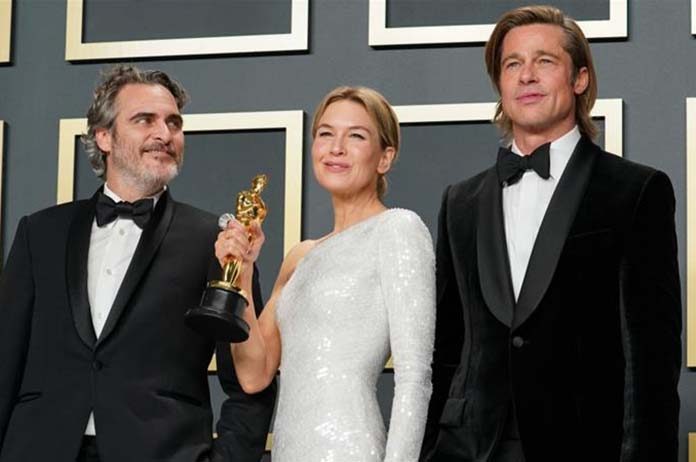 South Korean black comedy film Parasite was the big winner at the Oscars this year!

This year’s award ceremony was held at the Dolby Theatre in Hollywood and, for the second year in a row, there was no host.

Singer and actor Janelle Monae opened the Oscars with an energetic musical performance which paid tribute to the films of the year.

Parasite won the award for Best Picture, beating out Hollywood hits like Joker and 1917. The film made history by being the first non-English language to win an Academy Award.

“We never imagined this to ever happen. We are so happy. I feel like a very opportune moment in history is happening right now,” said the producer, via an interpreter.

Pitt said this awards season had put him in a reflective mood.

“I am not one to look back but this has made me do so and I think of my folks taking me to the drive-in and seeing Butch and the Sundance Kid … loading out the car and moving out here … Gina (Davis) and Ridley (Scott) giving me my first shot (in 1991’s Thelma and Louise).”

“To all of the wonderful people I have met along the way to stand here right now…. Once Upon A Time I Hollywood? Ain’t that the truth! This is for my kids who colour everything I do. I adore you.”

Renee Zellweger won Best Actress for her performance as Judy Garland in the biopic Judy, while Joaquin Phoenix won Best Actor for Joker.

Rapper Eminem took to the stage for a surprise performance of Lose Yourself which was the theme song to his 2003 film 8 Mile, confusing a few stars in the audience.

Below is the full list of winners this year: (winners indicated in bold)

Actor in a Leading Role

Actor in a Supporting Role

Actress in a leading role

Actress in a supporting role

Toy Story 4
How to Train Your Dragon: Hidden World
I Lost My Body
Klaus
Missing Link

American Factory
The Cave
The Edge of Democracy
For Sama
Honeyland