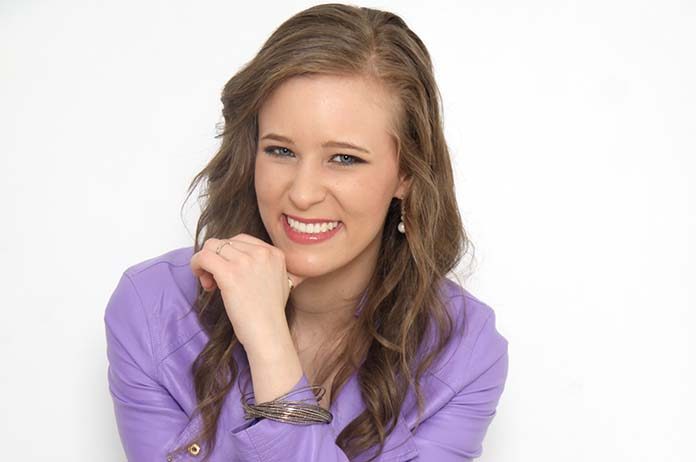 When Lauren Yeates was young, she never pictured her life would consist of lights, cameras, microphones and a list of celebrity contacts. Yet here she is at 25 with over 30 thousand views and interviews with the likes of Hugh Jackman and Adam Sevani.

Everybody imagines the day they meet their favourite celebrity. They picture screaming, hugging, thanking them, not being able to stop talking. This was not the case for celebrity interviewer Lauren Yeates. “I was so glad my mum was there because I said nothing” she recalls about her first celebrity encounter. This shy girl has come a long way since 2010 and her Justin Bieber blog. She fought her way out of her comfort zone to become a 24-year-old CEO of Rave It Up, Australia’s only solely owned and operated entertainment news company.

The transformation from shy fan girl “who wasn’t going to meet any new people” to confident CEO was not an overnight transformation for Lauren.  Lauren’s shyness was well-known, especially by her high school teachers. Her senior school Math Teacher is shocked by the progress she has made “I can’t get over Lauren. She was the shyest girl. She would not say a word. Now look at her.” It took a push from her parents to attend a business seminar hosted by Dale Beaumont,who is now one of her biggest mentors. She didn’t have much hope going into this event and viewed it as “cool, I get a day off school” and required that she sacrifice her Saturday morning sleep in, not knowing that she would fill up a notebook that her parents gave her that she expected to stay empty.

The seminar was about how to become an successful entrepreneur and how to run your own successful business, and “that just lit a spark in me even more” recalls Lauren, who had always dreamed of getting into the entertainment industry but was never quite sure how.

This program, according to Lauren was “the big catalyst for my whole life” which is why after meeting and emailing her that Dale spoke to childhood friend Brent Williams who was hosting a self-development seminar for teens to which he gave Lauren a full scholarship to attend. Although hesitant to take this leap as she had not fully overcome her shyness she realised “that it was a once in a lifetime opportunity” and “I would regret it if I didn’t take it”. So she went and as Lauren states “it was the best thing that ever happened to me” and “is the reason I am who I am today”.

So it was through these seminars and the help of her mentors and family that she was able to push herself out her comfort zone and was able to create Rave It Up.

Rave It Up was a business Lauren started with no one to help her but herself. She conducted the interviews, wrote scripts for weekly rundowns and radio shows and edited all of her videos herself. It wasn’t anywhere near as easy as she made it look, especially while juggling another job in Gold Class at her local cinema.

Lauren’s hard work has not gone unnoticed by family and friends either. According to one of Lauren friends, Hope Gomez “For as long as I’ve know Lauren she hasn’t stopped, she is always working and pushing for something new”.

Although the workload has lessened as she has brought on team members to help with the writing and filming of all of her stories and interviews, Lauren still conducts and edits all of her interviews herself. Although she tells me a story of her recent interview with Shannon Noll that after the interview, one of her cameramen offered to help her with the editing and her hilarious response was “oh what, someone to help me edit, yay”.

As the coffee cups clink against the saucers and the sound of espresso beans being ground fill the room of a local Rouse Hill café, Lauren shares with me a story about her first interview. “My very first interview was Justice Crew” and “you could tell I was still trying to figure it all out… in terms of my presenting style. You could definitely tell I was really nervous”. Although she was fidgety and didn’t know where to look as any novice presenter would, her questions were perfectly on point and gave the interview the ‘Lauren Yeates style,’ which she has carried through even to her most recent interviews.

With her interview list extending from up-and-coming artists to Australian favourites such as Mark Vincent, Todd McKenney, Shannon Noll and Rob Mills and the likes of Hugh Jackman, Adam Sevani and some of the cast of Pretty Little Liars, Lauren Yeates’ questions are something that makes her interviews so unique and special that separate her from the entertainment segments of other Australian News shows.

A question that she never fails to ask her interviewees is “Knowing what you know now, what would you tell your 14 year old self?” It is a questions that causes the interviewees to reflect back on who they were before they were considered celebrities or famous and have a real think about what they have learnt in their life, and that is something that Lauren has found really builds a connection between herself and the person she is interviewing. This question has gained such great responses that she is turning it into a book that is due to be released this year.

Her book titled ‘Knowing What I Know Now’ is a compilation of her favourite answers to this question as well as a little biography about the person along with a picture.

When posed with this question herself, Lauren responds confidently “For little Lauren at 14, I would tell her to speak up more and believe in herself”.

With Cuban music playing in the background, Lauren ponders on what she considers her career and personal highlights to be when she is interrupted by a quirky text from her mum that makes her laugh. “There has been quite a few memorable moments” she recalls but continues on to say, “but as funny as it is, the high point is right now with the book coming out”.

With extravagant hand gestures and a quirky smile, she explains the emotions she is experiencing as she takes the next step in her career journey. “When I first got the proof copy, I got teary.” She then continues on to say, “it has been a word document for years and now it’s a physical copy, in my hands, with my name on it. Its like Wow!” Even as she is telling me this story she has to calm herself down and whispers to herself ”don’t do it now Lauren” as she tries to keep her emotions in check. This book has been a long-term goal for Lauren as she has wanted to be an author or to write a book from a young age. “In my mind as a kid I was like, I will write a book one day”.

As Lauren reflects on her whirlwind of a life and career, she pauses to think about what advice she would give to others wanting to get in to Entertainment reporting. “One thing would be to practice” but her most important piece of advice is “to forget about other people’s opinions and just do you… you’re going to get no’s but keep pushing through because there will be a yes.”

To say that Lauren has come along way in the last 10 years is an understatement, from that shy girl who hid behind a keyboard fangirling over Justin Bieber to owning a unique company and advocating for others to get out of their comfort zone, she has achieved amazing feats and gained a level of self worth and confidence that is to be admired by her fans.

Written and interviewed by Georgia Wright