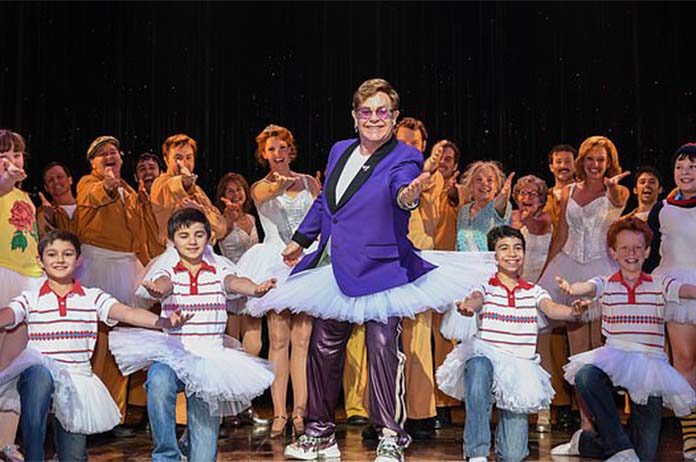 Elton John is a man who is often full of surprises, and he pulled off another one in Sydney when he joined the cast of Billy Elliot the Musical on stage on Thursday.

The British superstar appeared during the performance’s curtain call, to which the surprised patrons gave a roaring applause and loud cheers.

Down Under for his Farewell Yellow Brick Road Tour, the 72-year-old English singer looked lively on stage as he joined the young cast in a tutu.

Sir Elton has a special place in Billy Elliot the Musical, having created the music. The book and lyrics are by screenwriter and playwright Lee Hall, the man behind 2019’s Elton John biopic, Rocketman.

After the curtain was raised, Sir Elton stood between two of the cast. The singer-songwriter stood out in his usual unique style, sporting a vibrant purple jacket, metallic tracksuit pants and a large white tutu.

He remained on stage as the rest of the production’s cast joined him to wave at the crowd and take their final bows.

And of course, this unexpected pleasure was well-received, especially on social media.

“The company of Billy Elliot the Musical were surprised by a very special guest last night…SIR ELTON JOHN!” announced the official Instagram for Australia’s Billy Elliot The Musical.

“Elton joined our cast on stage for the curtain call and the audience erupted into thunderous applause!” the post continued.

The first show on the Australian leg of Elton’s final tour will be in Perth on Saturday night at HBF Park.

Earlier this month, the singer announced Sydney artist Tate Sheridan would be his support act for his outdoor concerts.

Interestingly, Tate first supported Sir Elton for his 2015 Australian tour when he was just 23-years-old.

In his Farewell Yellow Brick Road Tour, the songs from his legendary 50-year career will be showcased against a backdrop of never-before-seen images and videos.

Also included will be a brand new stage production, along with a tour wardrobe designed by Italian fashion house Gucci.

Are you going to see Elton John on his Farewell Yellow Brick Road Tour? What did you think of him turning up on stage during Billy Elliot? Let us know in the comment section below.